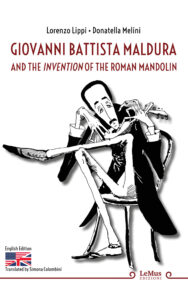 GIOVANNI BATTISTA MALDURA AND THE INVENTION OF THE ROMAN MANDOLIN

Giovanni Battista Maldura (1859–1905), a renowned musician and tireless entertainer of Rome’s musical life in the second half of the 19th century, was also an undisputed innovator of a new concept of mandolin making, an instrument of which he was recognised as a great virtuoso. The need to restore the legitimate role of the figure of Maldura arises at a time when the mandolin is regaining, after a few decades of oblivion, its rightful place in the musical and cultural history of Italy, finally freeing itself from the stigma of the second half of the 20th century that bound it predominantly, if not sometimes exclusively, to a mostly popular soundscape. This book – written in two voices – brings together Maldura’s two souls: that of a brilliant teacher and musician, and that of a luthier, two souls that were never too far apart.

Lorenzo Lippi has been considered for a long time one of the most esteemed Italian luthier. He started his career mostly involved in building antique instruments and later, for years, also in classic guitars and mandolins. He is deeply experienced as teacher at the “Civica Scuola di Liuteria” in Milan, where, since 1979, he had an active role in training a big part of the current Italian luthiers and also several foreign luthiers. Well known also for his organologic and technologic studies, he is author of several releases; recently he has written some items for the new edition of Grove Dictionary of Musical Instruments; he is often invited to give lectures and master class overseas. First Prize and Gold Medal at the “Third International Instrument Making Competition” in Pisogne (Brescia). Several musicians all over the world (Japan, Netherlands, Norway, Italy, France, Austria, USA, Switzerland, China, Korea, Taiwan, Mexico and Greece) perform Lorenzo Lippi’s instruments.

Donatella Melini Researcher (RTDa – sector L-ART/07) at the University of Pavia, she graduated in Disciplines of Music and Performing Arts from the University of Bologna where she later specialized in Renaissance Art History. In 2002, she received an advanced Master’s degree in “Philology of Musical Texts,” from the University of Pavia and in 2008 a PhD in Musicology from the University of Innsbruck. Master luthier, in 2016 she was included in the official national list of restoration technicians of Mic (Italian Ministry of Culture). A scholar of Musical Iconography and Organology she collaborates with the Associazione Liutaria Italiana (A.L.I.) and the Antonio Carlo Monzino Foundation in Milan. Since 2018, he has been a scientific consultant to the National Museum of Science and Technology in Milan for the study and preservation of the Emma Vecla collection of musical instruments.